Every film maker has a target audience,but there exist some who make films for themselves. Quentin Tarantino as agreed by most of the critics is one of them and to understand his films one needs to get into the details.
Infinite fan theories and various schools of thought suggest a strong connection between two of his most memorable films, Pulp Fiction (1994) and Reservoir Dogs(1992).The question though is whether RD is a sequel to PF or a prequel? Well the answer is pretty evident, if you are smart enough to ignore their release dates.
Yes, Reservoir Dogs is a sequel to Pulp Fiction even though it was released earlier and I personally think these two full-fledged films are a mere collection of episodes from the Tarantino Universe like all his films, where everything is connected. Here are a few things to look out for while deciding which school of thought you should support.

1.Mr Pink does not believe in tipping

//
Most of the people who have seen Pulp Fiction have watched it again. If you are one of them then you must be aware of Steve Buscemi`s blink and his miss appearance in Pulp Fiction as the waiter dressed as Buddy Holly at Jack Rabbit Slim’s, the one who serves Mia and Vince.

By the end of Pulp Fiction, the restaurant is closed (that’s a fact), leaving the waiters unemployed. But, Buscemi needs to pay his debts and eat, so he turns to a life of crime to make money quickly. He participates in minor heists, eventually growing inside the criminal community, until he’s hired by Joe Cabot to participate in the diamond heist as Mr. Pink. While watching Reservoir Dogs, you may notice that Mr. Pink is the only criminal who is nervous (except for Mr. Orange because, well, reasons), while the others are all chilled out, even with all hell breaking loose which means that Mr. Pink wasn’t acquainted with that kind of situation, that he was a noob criminal, why? Because a couple of years ago he was just a waiter, while all the other individuals have been in that line of work for over a decade. You know why Mr. Pink says he doesn’t believe in tips during the first scene? Because he was a waiter who didn’t receive them. He said he once “worked a job” that payed minimum wage, he was talking about his job as a waiter.

2.Mr Orange is the snitch

After the final showdown of Tim Roth who plays Pumpkin in Pulp Fiction with Samuel Jackson who plays Jules, Pumpkin is convinced that a life of crime serves no purpose and ends in a pit no matter which route you take. This leads to his break-up with Yolanda as he eventually becomes an under cover agent for the cops (wouldn’t have been difficult considering his familiarity with the life of criminals) and is introduced to us by Quentin as Mr. Orange in Reservoir Dogs. The location for his meeting with his boss during the operation is that same restaurant which he robbed in Pulp Fiction. Life comes a full circle for him as he is convinced that he made the right choice by leaving crime behind and switching to the right side of the law. Unfortunately for him though “the right side” becomes the reason for the bloodbath in Reservoir Dogs which results in his death.
Strangely his name in both the movies is related to the colour orange. (Pumpkin in PF and Mr Orange in RD). Well now you don’t find it strange do you?

3.Mr Wolf is one of the dogs and so is Jimmie 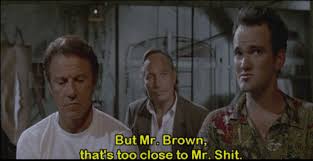 You must remember Mr Wolf, the calm classy guy who sips coffee while there is a dead body on the back seat of a car in the driveway which must be taken care of as quickly as possible due to and during “The Bonny Situation”. You must also remember Quentin Tarantino`s character from Pulp Fiction as Jimmie(Or Jules`s friend or Bonny`s Husband or The guy who made amazing coffee, whoever you remember him as). Jules calls Joe and asks for help and that`s where Mr Wolf is introduced to us which means that Joe knew Mr Wolf since then and since Jules was friends with bonny`s husband it implies that all four knew each other. Hence when the diamond heist is planned they are called upon again and this time are introduced to us in Reservoir Dogs under the alias of Mr White and Mr Brown. 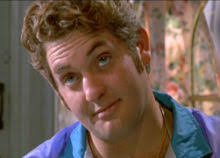 All those who have watched both the movies multiple times can`t help but notice the striking similarity in facial features as well as expressions between Nice Guy Eddie from Reservoir Dogs and the girl who accompanies Mr Wolf in Pulp Fiction.

The reason behind this similarity is pretty evident. That girl is Joe`s daughter. Yes, Nice Guy Eddie looks so much like her because he is her brother. This like the Vega brothers is a family tree from the Tarantino Universe with the only exception being that Quentin was open about Vincent from Pulp Fiction and Vic Vega aka Mr Blonde being brothers. (He didn’t have a choice,He had to disclose it because he was planning to make a movie with both of them as leads titled “The Vega Brothers”) unlike the above observation which viewers had to make themselves.
Nobody knows about the years both the films were set in.One can simply assume that they are most likely set in 92 and/or 94 respectively, or at least some years after 1986, because ‘Like A Virgin’ is already a thing and ‘A Flock of Seagulls’ is old enough for people to make fun of. Now, going back to the theory, we also know that only a few of Pulp Fiction’s characters actually reach the end of the story alive and well, that 4 of them are played by actors who also appear in Reservoir Dogs. Those actors being: – Steve Buscemi – Tim Roth – Harvey Keitel and Quentin Tarantino.

Latest posts by Lakshay (see all)